I’ve been asked so many times how it feels to grow up having no brothers and sisters. At the top of my head I say it’s great: you get all the attention, financial and emotional support. I consider myself lucky. But there are some setbacks – I think about what could be, what could have been, and that’s when I feel the pang of loneliness. Don’t get me wrong I don’t wallow in it…I just want it sometimes. Then I wake up and reality sinks in. I might not have the biggest family, but I’m still happy and thankful.

This afternoon we visited our loved ones at the cemetery. It’s nothing grand. The scorching heat expedited our trip, but before we left, we said our prayers, lit our candles and left our flowers. I looked around and saw more than a few tombstones unkept, with the paint virtually gone. Clearly they were forgotten. It’s a sad sight really. I know this is getting heavy, but I just need to put it out there: I don’t want to be forgotten. I want to live a full life and all the frills attached to it and still be remembered by the people I left behind.

Yeah, I daydream a lot. I think about the things I can do, will do and should do. Sometimes I ask myself how I want people to remember me, what legacies I leave behind. I’m being romantic here, but I do want to be remembered because of my food and company, which go hand in hand.

I made potato gratin yesterday and I wanted to savor that moment. The funny thing is, the first time I made it for class, it was undercooked. I’m happy that I have the luxury of time to make sure this heavy, hearty dish is cooked perfectly. It’s a thing of beauty in its simplicity.
With the same desire of not being forgotten long after I’m gone, I don’t want to forget the moment I opened the oven and just knew everything made sense and fell into place. I was vindicated.

Lately, I rarely get up early. My usual day would begin at around 8:30 am, and then there are 4-hour power interruptions here and there, I usually have brunch, I skip breakfast, I lie in bed all day, I cram work into one day, and I cram some more…

But, when I do get to wake up at 6:00 am, breakfast becomes the most important meal of the day.

This time I baked the egg rings instead of microwaving it. I’m precluding the possibility that the yolk might explode. Yes, it has happened before. Plus, it’s less stressful.

Time slows down and little moments (like having breakfast with people before they leave for work) becomes golden.

This is my definition of a crazy amazing breakfast. 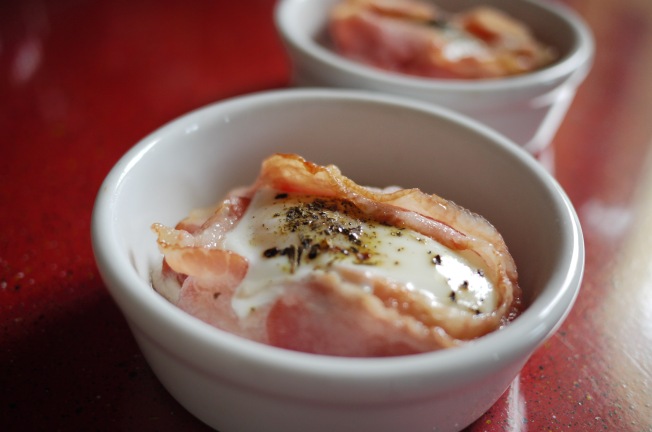 My mom was the first person to ever introduce me to bacon, when I was I think around 5 years old, sickly, thin and asthmatic.

Suffice to say, 15 years later, I still have that love affair with bacon, and my pudgy belly is enough to prove it.

She was also the one who introduced me to the concept of bacon and eggs, and she almost always prepares it this way – using ramekins, with the bacon lining the eggs, and cooked in the microwave.

A weird thing about me is I like my eggs sunny side up, but I’m not a fan of the runny yolk, so either I: 1. give it to my dad for him to eat, or 2. cook the eggs enough so the yolk hardens, then I give it to my dad, if that makes sense.

But still the bacon and eggs combination for breakfast never lets me down, especially on mornings when my parents are long gone and I’m left to thrive on my own.

The use of ramekins makes it easier for me to cook these in the microwave. PLUS THERE’S A GAPING SPACE IN OUR KITCHEN WHERE OUR STOVE TOP AND OVEN USED TO BE SINCE IT’S DAMAGED AND AWAITING REPAIR, so yeah, thank you microwave.

1. Line the inner side of the clean ramekin with the bacon.

3. Cook it on high for 2 1/2 minutes or until you can’t see the slimy film or until you think it’s good to go. I like mine just right – a little runny, bacon starting to crisp and there’s a white film over the yolk

So the bacon did collapse on the egg while it was cooking, but I don’t really pay much attention to detail. Hey it was still a good breakfast. Serve it with a heaping scoop of rice, EVEN BETTER. 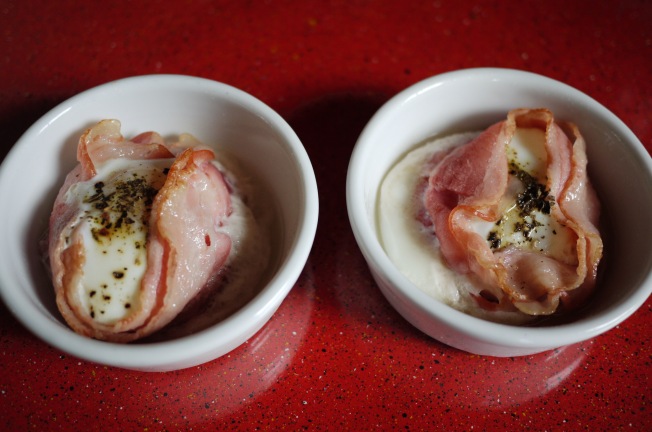 What are you looking for?

The Hungry Giant (THG) is a blog about the love for food and how an amateur cook tries to capture his love through words and pictures. More of that HERE

THG is on FB

THG is on FB